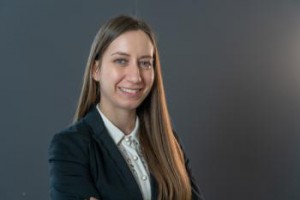 Academic award for academic excellence from the School of Chemical Engineering of AUTh (in the entry year 2005 and in the graduation year 2010) and from the Technical Chamber of Greece (TCG) (2010).

Dora received her diploma in Chemical Engineering from Aristotle University of Thessaloniki in 2010, wherefrom 5 years later she successfully completed her PhD in the development of mucus-permeating nanoparticulate drug delivery systems for the delivery of biopharmaceuticals, which was performed in the context of the EU-funded project Alexander (FP7-NMP-280761) in collaboration with major pharmaceutical industries and other academic partners. During her PhD, she was occupied in the framework of a large-scale collaborative FP7 project, which allowed her to develop her excellent research and analytical skills. Upon completing her PhD, her entrepreneurial mindset has allowed her to land a job in a start-up company. Since 2016 she is working at PLiN Nanotechnology, a research-driven spin-off company founded in 2015. At present, she serves as the General Director and Head of R&D at PLiN Nanotechnology, while also is occupied as an Adjunct Assistant Professor at University of Western Macedonia. Her primary and current research interests involve the development of functionalized nanostructured materials with applications in various industrial sectors (e.g., cosmetics, pharma). Her academic portfolio also includes reviewing activities as a Review Editor at Frontiers in Bioengineering and Biotechnology.

Dora has also extensive experience with Projects funded under the National Strategic Reference Framework (Founding Source, Ministry of Education, Research and Religious Affairs of Greece) and under the 7th European Framework Program for Research and Technological Development, engaging numerous projects as a PI and/or Coordinator.